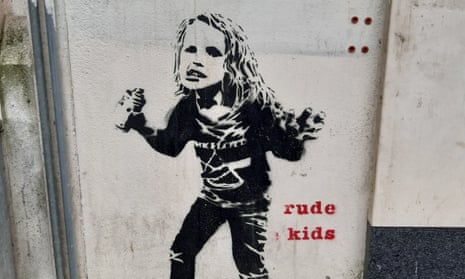 We asked you to tell us about your much-loved pieces of public art across the country. Here are some of your suggestions

They’re cheeky and unadulterated. So Banksy-esque. They act to eradicate the stigma of graffiti as mess. There is nothing unclean about this. Except, perhaps, the manners of the kids that this artist portrays. We all know children can get away with an awful lot of mischief, and this generates a smile from that sneaky inner child in all of us. It’s an altogether brilliant concept and collection that the artist absolutely gets away with. Lara, 23, graduate, Chester

Another Place, Crosby beach in Merseyside by Antony Gormley

The main thing I love is how it’s different each time you go – it varies with the tide, the weather and what you take with you. On a calm day they remind me of Tolkien’s elves watching and waiting patiently for Valinor. The other thing I love about it is how you can get used to it in a way you can’t with most art. People dress them up at Christmas, give them hats, knit them scarves or full outfits. Many is the family photo that includes a new member on the beach. You can sit right down beside them, put your arms around them, share your picnic or your secrets, talk to them as though they were someone you miss. They can be anyone and everyone, and they’re always such good listeners. Charlotte Jackson, 36, data manager, Loughborough

Although hugely respected it doesn’t get much attention. You can often sit with it undisturbed in the middle of all the frantic traffic. The detail in the clothes, the boot laces, etc. all represented in bronze, make the figures very moving and intensely human despite their heroic size. Whereas the giant howitzer has the feel of brute modernism. It’s a remarkable, complex work of art, formally satisfying and genuinely moving without any trace of the cloying sentimentality that often hangs around monuments to the dead. It’s best to experience it where it stands. David AP Thomas, painter, North Yorkshire

‘A colourful and bold steel hoop’

The Steel Wave in Newport, South Wales by Peter Fink

My mum and sister moved to Newport in 1978 and I used to visit them so I remember the razzmatazz when it was unveiled – this colourful and bold steel hoop on the then dreary bank of the Usk. It seemed to herald a flurry of great civic art in Newport then so every time I visited there was the Market Hall pig, the St Woolos bull, the creepy Chartists statues in Commercial Street and of course the amazing (sadly demolished) Chartists mural in John Frost Square – just magical stuff as I walked into town from my mum’s council flat. Mick Spicer, 53, promotes time banking, Leamington Spa

The sculpture is a beautiful and perfect depiction of an exercising woman, made up of metal ribbons resembling the woman’s muscles. It reminds me of textbook anatomy pictures of the muscles of the body, which is so appropriate for the sculpture’s setting, yet it does so without looking gruesome. It’s a very inspiring piece for a public sports centre. Jon Broughton, 50, patent attorney, Bishops Stortford

‘Its spirit of optimism is needed now more than ever’

It brought contemporary public art to the Isle of Wight in 1997 and is inspired by the island’s lighthouses and geology of coloured rocks and sands. The artist designed it to welcome people to the site and contribute to a hospital environment designed to promote healing through artwork. The spirit of optimism that it embodies is needed now more than ever. Guy Eades, 70, retired NHS arts and health manager, Isle of Wight

The Children of Calais in Saffron Walden by Ian Wolter

Unveiled by Lord Alf Dubs in 2018, Ian Wolter’s sculpture is a deliberate riff on Rodin’s The Burghers of Calais near the Houses of Parliament. It is a powerful, brave, and thought-provoking piece of art, that has been warmly welcomed into the heart of this small market town. Children recognise children-in-art and play around the figures, and adults are often seen to lay a hand on the figures’ shoulders as if to offer comfort. A clever, deeply human concept, artistically well-executed, it is at once attractive and disturbing, engaging and inspiring. Clare Mulley, 51, author, Saffron Walden

First off, it acts as a gateway to the approach to Belfast from the M1 on an otherwise uninspiring motorway/bypass; illuminated at night it is a bright beacon in the west of the city and lifts an otherwise pretty grey and unassuming area. But most of all, in typical Belfast fashion it has been blessed with suitably irreverent but also implicitly affectionate names such as the “Westicles,” the “Balls on the Falls,” or the “Testes on the Westes”. Andy Ryan, planning and environmental lawyer, Belfast

‘It speaks of work, rest, nature and the passage of time’

The hours of Katie Wearie sundial, Linlithgow in Scotland by Tim Chalk

Katie Wearie was a 19th century cattle drover who, it is said, rested under a tree at this place on her way east from the Falkirk Tryst. Though the original willow is long gone, the shadow of the bronze tree indicates the hours marked out on the ground. Unusually, this is an example of public art dedicated to a woman, and a working woman at that. It is a reminder of the contribution women have made through their hard work, but which has often been overlooked in the history books. The artwork speaks of work, rest, nature and the passage of time. It is functional as well as decorative, and the flower beds enhance the sense of peace it invokes. Mary Easson, retired teacher, Linlithgow, Scotland

‘I love that there is always space for a friend’

I moved to Liverpool in 2009 and loved this statue from the first time I saw it. Inspired by the song of the same name by The Beatles, Eleanor Rigby is one of those lonely people, sat by herself, faceless on a bench with only a little bird for company. The bench is long but inviting, and I love that there is always a space there for a friend. Kerrie McGiveron, 38, PhD researcher, Liverpool