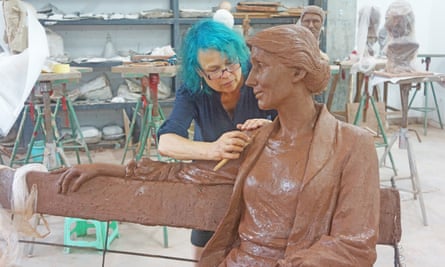 After the controversial unveiling of a naked statue honouring Mary Wollstonecraft this week, plans to erect a public monument to a fully-clothed Virginia Woolf have gained fresh momentum.

Maggi Hambling’s Wollstonecraft sculpture in Newington Green, London, which depicts a silvery, naked woman, is intended to represent the “birth of a movement” rather than the writer known as the mother of feminism. But it has attracted a wave of criticism. The author Caroline Criado-Perez, who led the campaign for a statue of Millicent Fawcett in Parliament Square, described the decision-making process as “catastrophically wrong” and said the representation was “insulting” to Wollstonecraft.

Why I hate the Mary Wollstonecraft statue: would a man be 'honoured' with his schlong out?
Read more

Cheryl Robson at not-for-profit arts organisation Aurora Metro Arts and Media has been fundraising for three years for a statue of Woolf to be placed by the riverside in Richmond, London, where the author lived and worked for a decade. Robson said that, since the Wollstonecraft statue was revealed, the Woolf fundraiser had seen thousands of pounds pour in. It has now raised almost £16,000 of the £50,000 target.

The Woolf monument is intended to be a lifesize bronze statue of the author sitting on a bench overlooking the river, with passersby able to sit beside her. Sculptor Laury Dizengremel is depicting Woolf in a contemplative, relaxed moment – and fully clothed.

“It has raised a few eyebrows because we’ve got her gently smiling and enjoying her day, which goes against the stereotype of her being an anguished artist,” said Robson. “There’s a bust of Woolf in Tavistock Square that depicts her as an anguished tortured genius. She hated that bust, so it’s pretty awful that’s the thing that has come to represent her after her death – it’s so stereotypical of the idea that the only way a woman can be a genius is if she’s mentally ill. So we’re challenging that trope. If you read her diaries, every day she walked her dog along the river in Richmond and sat and enjoyed the view. So it’s true to history, and I think people have enjoyed the idea that they can sit next to her.”

Less than 3% of statues in the UK are of non-royal women. Robson said that, though there are about 100 statues and monuments in public spaces in Richmond, “not a single one is of a woman of achievement, although we have got some naked nymphs. So it would be great to see women with their clothes on in our public space who are not royals.”

“There are all these sculptures of men, men, men, and we have very few women,” said Dizengremel, whose recent commissions include the David “Bomber” Pearce memorial for Newport in Wales, and a statue of Capability Brown in Hammersmith, London. “When you look at Virginia Woolf, what you’ll see is a woman, clothed, sitting on a bench with a book.”

The Mary on the Green campaign, which took 10 years to raise £143,000 for its Wollstonecraft statue, has said that it was grateful to everyone who had “thoughtfully engaged” with the statue. “The diversity of views, openly expressed, is just what Mary Wollstonecraft would have loved,” the campaign said in a statement. It also acknowledged the divided response: “Our position has always been that the artwork should capture Wollstonecraft’s spirit: she was a pioneer who defied convention, and she deserves a memorial that’s as radical as she was.”

The Wollstonecraft campaigners also said that they looked forward to more campaign groups raising the funds to celebrate and memorialise the impact and achievements of other women, highlighting the campaign for a statue of suffragette Sylvia Pankhurst for Clerkenwell Green in Islington, which has raised £2,000 of £50,000.

“I like Maggi Hambling’s work, I just don’t think it was really fitting as a way of honouring a writer and thinker like Wollstonecraft,” said Robson, who had supported the campaign for the Wollstonecraft statue, and published 50 Women Sculptors, which features both Dizengremel and Hambling.

Dizengremel agreed. “I question Maggi’s interpretation of what would best represent the spirit of Mary Wollstonescraft, how she didn’t anticipate that involving nakedness in the portrayal of a feminist icon would result in the tribute being protested against by the very audience it is intended for,” the sculptor said. “She defends the sculpture by saying people are missing the point, but I feel that with art, there oughtn’t to be a point that is made that requires an explanation. In other words, the viewer looks at a piece of art, and should get something out of it - the point should come across through the artwork itself. No need for a sign board or anyone including the artist to explain what the concept is.”

Dizengremel is currently working on the Woolf statue, with planning permission already granted by Richmond council. Aurora is holding an online gala event on 12 December to raise money for the sculpture, while 20% of profits from sales of The Women Writers Handbook, published in July, will be donated to the fundraising campaign.