Dominic Cummings is leaving the band. But that was always the plan – nothing to do with the impending Brexit endgame 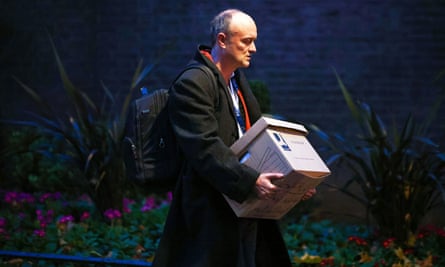 Is it bigger than Geri leaving the Spice Girls? Don’t be ridiculous. There are, however, similarities with the scheduled departure of Dominic Cummings from Downing Street. As Geri put it in an address to fans 21 years after the event: “I need to say something I should have said a long time ago: I’m sorry – I was just being a brat.”

No one’s bigger than the band, as the Cummings solo material will surely prove. Shortly after Geri walked out, the Spice Girls went on to have a Christmas No 1 with Goodbye , a hilariously-teeth-gritted “farewell” to someone none of them could be doing with any more. This year, Downing Street will also take Christmas No 1 – No 1 European death toll, unfortunately.

Still, a massive week for people whose showbiz is bald guys in lanyards. Or to put it another way, there’s been a dirty protest in the Slytherin skunkworks. There have been many, many times over the past 72 hours when I have wanted to drive extremely fast to Barnard Castle. Not stop in the car park or anything – just keep on driving, foot down, until the high-velocity contact with 12th-century stone made it instantly possible never to have to think or hear about Cummings or Lee Cain ever again.

Real talk: Cummings was a great campaigner utterly defeated by the business of government, which was upsetting considering that was his major obsession, and also that he was basically the government. It’s possible Ginger Spice could have done better, and she hasn’t been playing with a full set of platform heels since the Major administration. At the very least she’s a Tory, which would give her one up on Cummings with the entire Conservative parliamentary party.

To put it in terms Cummings would reflexively understand: it’s special to see an English director of football lose the power struggle for once. Dom and the other guys whose names we’ve recently had to find out have only one speed: aggro. Furthermore, Boris Johnson’s Downing Street has been like one of those boys’ schools where girls are only accepted in sixth form. They’re here now, however – and I keep reading that a combination of Johnson’s fiancee, Carrie Symonds, his new press secretary, Allegra Stratton, and his policy chief, Munira Mirza, has done for the Vote Leave faction. Typical. God, I hate to see women ruining everything for this group of great mates. I always think of these guys like the Beatles. The Isis Beatles, obviously.

Let’s face it, Johnson’s No 10 has always come off like the sort of tedious manosphere where wan spads in suits give each other nicknames like Gazza, Caino and Roxstar. Maybe you get the costumed vigilantes you deserve. Gotham had Batman. We got the giblets of the Mirror’s chicken suit.

I do mourn the missed opportunities this week. Times have certainly changed since I used to dress up in silly costumes for newspapers. Why on earth – WHY? – did the Mirror not send the Mirror chicken to doorstep Lee Cain yesterday? Think of the pictures. That moment when the navy wool coat, collar turned up against the headlines, makes contact with the matted yellow fun-fur. When you realise that a Downing Street security pass isn’t half as fun to wear round your neck as a red latex wattle. When the Cain eyes lock agonisingly with the Mirror chicken’s big blue plastic ones, and Lee’s just thinking: “What have I done? I’ve become the monster.”

As for Cummings, the revolution devours its children. He has been thrown under a £350m bus, a feat last managed when East 17’s Brian Harvey contrived to run himself over with his own car, an incident the singer put down to a bizarre chain of events sparked by eating three baked potatoes.

Speaking of bizarre chains of events, Cummings seems to be claiming this shitshow was always the plan. Last night he reportedly “pointed to a blog” written in January where he said: “We want to improve performance and make me much less important – and within a year largely redundant.” Well, he is much less important and now redundant, so two out of three ain’t bad. Sorry about the catastrophically non-improved performance and everything, but turns out he really was a superforecaster. It’s like that bit in the Lion King, right before Scar gets eaten by the hyenas, where he “points to a blog” wishing Simba all the best delivering on their levelling-up agenda.

Even so, is the timing a bit sus? The blog says Cummings will go “by Christmas”, which you’ll note falls six days before the UK finally creaks or crashes out of the EU transition period, with or without a deal. In that case, there’s not been an exit like it since the Iraq war. I’m thinking of Paul Bremer, the head of the coalition provisional authority, who handed over to the interim Iraqi government then burned rubber straight to the airport. Aren’t you staying for the party, Paul? It later emerged the looming implosion of Iraq was already so under way that he feared his plane would be shot down by surface-to-air missiles.

Anyway. As always with the madly elitist behaviour of his underlings, this Cummings tale is really a story about Johnson. This week MPs and commentators kept asking, archly, “But what does Boris WANT?” Jesus, guys – catch up. He wants a shag and some attention and someone else to make his problems go away, like he always does. The boggling insistence on seeing him as a nuanced and enigmatic character is what got us into this mess (led by a chronic newspaper columnist at a time of pandemic).

Even now, Johnson’s supporters are subconsciously implying it’s the job of other people to do the heavy lifting. As one ally had it: “We can get the old Boris back”. Note the prime minister’s passive role in all this. It does rather feel as if the public is being asked to put the spark back into its failing marriage with Johnson. If he’s straying, it must be their fault.

At least no one asks “What’s the worst that can happen?” now. Plenty more worst to come, no doubt, so hopefully News at Ten will cheer us all up with a montage of Dom’s best bits set to Goodbye. Here he is arriving at No 10 with his arse hanging out of his trousers. “Just a little girl, big imagination ... ” Here he is at his table in the rose garden, not apologising for torpedoing the most vital public health message in decades. “Gotta keep it strong before the pain turns into fear … ” And here’s the massive crescendo over this week’s slow-mo walk out of Downing Street. “You’ll always be SOME-ONE’S BA-BY..!” Cut to next May, with Cummings standing in Palo Alto wearing a sandwich board reading “Come and hire me if you think you’re hard enough”. As for what we’ll all be dealing with, well … aren’t you staying for the party, Dom?

• Marina Hyde is a Guardian columnist