Moderate and progressive Democrats broadly agree on all of these policies. Biden has no excuse not to enact them 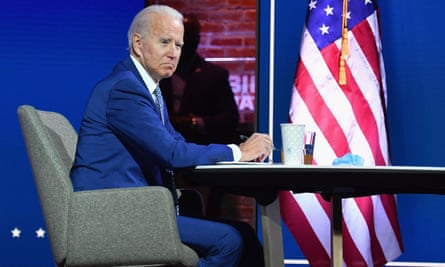 On 8 July, the Joe Biden campaign published the results of its unity taskforces with the former Bernie Sanders campaign in a 110-page document of policy recommendations. Though Biden has not committed to enacting the policies recommended by the taskforces, they represent a clear vision for what a Biden presidency might look like.

While each taskforce proposed new legislation to achieve its goals, you can also read the document with an eye toward what a Biden administration could accomplish on day one, without having to go near Congress. To that end, we found 277 policies that are clearly within the executive branch’s power to immediately pursue, at least in part.

On their own, none of these 277 policies will fully solve any of the interlinked crises we now face. But they can go a significant way toward immediate harm reduction. Some can even solve longstanding problems, simply by enforcing or fully implementing laws already on the books.

Perhaps most important, all of these policies are ideas that leaders in the moderate and progressive wings of the party broadly agree on, and that Biden should have no excuse not to enact, save for his own policy preferences. There is no hiding behind Congress on these topics. In Biden’s first hundred days, we should expect him to have made significant progress on many, if not all, of these proposals. Those which he does not adopt and pursue vigorously will speak to his nature as a president.

Not all of the proposals are new ideas. In fact, 48 are simply calls to roll back Trump-era policies, or to reinstate Obama-era rules and committees that Trump ended or disbanded. Any remotely competent Democrat ought to be able to implement these immediately, no matter what their particular policy vision.

Of those 48 Trump policies that the document calls to roll back, 28 are shifts in immigration policy. The overrepresentation of immigration issues speaks to the extent and the horror of Trump and Stephen Miller’s xenophobic project.

Each of the six unity taskforces proposed executive branch policies. From most to least, the issue areas were:

Some policies come from simply exerting the legal discretion at the administration’s disposal. What if instead of facilitating the Golden Age of White-Collar Crime, Biden’s attorney general prosecuted big oil for pollution law violations, and “aggressively pursued” employers who steal wages, break labor law, misclassify workers or cheat on their taxes? What if they descheduled marijuana and directed federal drug authorities not to pursue marijuana cases? What if the Department of Justice restarted Obama-era “pattern or practice” investigations into racist police departments, then broadened the practice to look at prosecutors and other criminal justice actors? Each of these policies is in the unity document.

While the Biden camp isn’t ready to embrace blanket federal student loan forgiveness, the document does call for pausing interest and monthly billing on those earning less than $25,000, forgiving debts of the permanently disabled and forgiving students exploited by predatory schools. It also finally sets clear rules for automatic enrollment in the Public Service Loan Forgiveness program, and strongly hints at ending the federal government’s contract with Navient.

That brings us to federal contracting powers. The document calls for a “Buy Clean” program to mandate the government buy clean energy produced with high labor standards. It also calls for across-the-board prioritization of contracts with small businesses owned by women, veterans and people of color. Those owners better take care of their workers, though, since Biden can require labor law compliance be taken into account in any federal-contracting decision (which somehow wasn’t a factor already). Plus, he can bar any company that outsources jobs, busts unions or doesn’t provide a $15-per-hour minimum wage from doing any business at all with the federal government.

But most exciting for some is the evidence that Democrats are dusting off their copies of the American legal code and looking for forgotten powers already on the books. Antitrust enforcement has gone from a non-issue to a central plank: the taskforce calls for a full review of Trump-era mergers and acquisitions, and to take action on those that caused “harm to workers, raised prices, exacerbated racial inequality or reduced competition”. That’s a direct call for antitrust to break out of the shackles of the consumer welfare standard.

The unity taskforce also wants public data on police use of force data which the Department of Justice is supposed to gather anyway, but never actually has. Perhaps that will change soon. Multiple taskforces also called for aggressive enforcement of the Americans With Disabilities Act; many activists have reflected in recent days on how its promises were never fully realized, and some Democrats seem to be listening.

Of course, there’s also discrimination within the federal bureaucracy itself. The Department of Agriculture’s horrific civil rights record has been the subject of investigations and hearings since at least 1999. The taskforce document lays out a series of thoughtful reforms to USDA, from greater independence for the Civil Rights Division to reforming a credentialing process that has barred farmers of color from passing on their property.

We predict that these agencies and departments will be most involved in enacting the 277 policies (from most to least):

As the Biden transition team begins sending “beachheads” into the agencies, and wannabe appointees jostle for influence, we hope that this quick guide will help a would-be Biden administration’s leaders to mentally organize for the task ahead. There is an overwhelming amount of Trumpian corruption to be swept out, and we face so many overlapping existential threats that there’s no time to delay. The Biden transition must prepare as much as it can in advance to enact sweeping policy changes come inauguration day.