Jimmy Kimmel: Trump to learn 'what it's like to be evicted from your home' 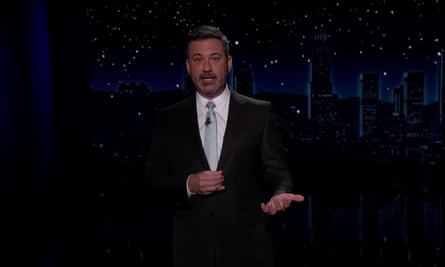 Donald Trump still refused to acknowledge his electoral defeat on Thursday, though “reality is starting to peek through the windows at the White House,” said Jimmy Kimmel. Trump “might be going down with the ship, but many of the rats are putting their little bathing suits on amid increasing skepticism that their boss will be able to pull another rabbit out of his Maga hat”.

“One reason that Trump’s advisers are so worried he might not be able to win is because he lost,” Kimmel continued, although acknowledgment of such a negative outcome is now anathema to Trumpism. “There’s no room for pessimism at the White House,” Kimmel said. “Racism, sexism, yes, but no pessimism.

“The big orange guy is said to be feeling blue,” Kimmel added, because “soon he’s gonna understand what it feels like to be evicted from your home in the middle of a pandemic”.

Trump’s children, meanwhile, are squabbling over how to handle their father’s intransigence; his daughter, Ivanka, reportedly fears the effect refusing to concede the election will have on Trump’s legacy. “Her father’s legacy?” Kimmel fumed. “Her father’s legacy is going to be a rusted half-section of wall on the border of Arizona.”

Stephen Colbert on Trump: 'There’s no reasoning with him at this point'
Read more

Sons Don Jr and Eric, however, “realize that the main reason [Trump’s] raising money to fight this ‘fraud’ is to line his own pockets”, Kimmel said. “Come on, Ivanka, you get that. This is Trump 101 right here.

“They say the last time the kids argued like this was when they fought over who got to shoot their injured polo pony,” he joked. “But I have to say, what a neat little microcosm of America that Trump’s actions are even tearing his own family apart. That seems just, to me.”

“It seems like no one around the president has the nerve to tell him that he lost,” said Stephen Colbert on Thursday’s Late Show. And “despite clinging to the job desperately, he’s not actually doing any of it.” Instead, the president has reportedly watched more TV than usual in recent days. “More? How?” Colbert wondered. “Did he move the Resolute Desk to a Best Buy?

“The president’s allergy to reality is hitting epic new highs,” as the White House has directed federal agencies to proceed with budget plans for a non-existent second term. “Now that is some industrial strength denial,” said Colbert. “At a certain point, even Norman Bates was like, ‘I’m starting to think my mom’s not looking too great.’”

Meanwhile, Trump’s campaign has resorted to soliciting donations from supporters for his “official election defense fund”. “And he’s not being subtle about it,” Colbert said, describing the campaign websites’ dancing buttons as “shake your little money-taker!” According to the fine print, at least half of each donation will go to paying off the campaign’s debts; only donations of $8,000 or more will support so-far unsuccessful efforts to “investigate” baseless accusations of voter fraud.

The fund is just “one last grift for the road”, Colbert said. “Before he finally leaves, someone better check under the Maga hat for the White House silverware.”

And on the Daily Show, Trevor Noah recapped the Trump administration’s efforts to undermine Joe Biden’s transition to the presidency, such as denying him access to classified briefings and relegating communication with world leaders to ad-hoc, backdoor channels.

“I owe Donald Trump an apology. I honestly thought he could never change, but he has. The dude went from being an African dictator to a Nigerian prince.” pic.twitter.com/2H6IxOZTZ2

“The real question is: why? Why won’t Trump just acknowledge that he lost?” Noah queried. “Why is he out there every day tweeting bogus videos and spreading conspiracy theories about election fraud. Why? Is it because of his fragile ego? Is it because he wants to take the country down with him?”

It could be any of those things, Noah said, but “it could also be about the Benjamins.” The Trump campaign, not to mention Trump himself, remains deeply in debt; contesting the election and requesting donations to “count the votes” means more income from a presidential race that has ended. Over half of Trump’s “official election defense fund”, according to the fine print, actually goes toward paying off campaign debt and a slush fund that links directly to the president.

“My man, Donald Jobless Trump – this guy never misses a hustle,” Noah said. “I mean, for anyone with brains, it looks like Donald Trump is scamming people out of their money by saying that his country wrongly kicked him out of power.

“I guess I owe Donald Trump an apology,” Noah concluded, “because I honestly thought he could never change, but he has: the dude went from being an African dictator to a Nigerian prince.”