'It's all such new territory': what it's like growing up trans in middle America 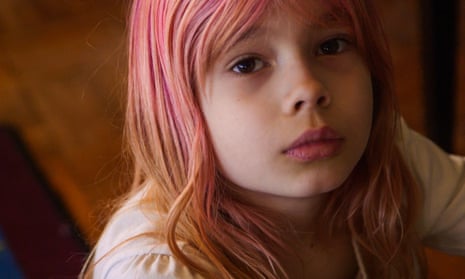 A new documentary captures five years of mundane, raw, joyous and heartbreaking moments from families with trans kids in the midwest

Transhood, a new documentary following four transgender youths in the midwest, hovers in the tension between universal and specific: the navigation of adolescent breakups and alienation, changing times and bodies, learning to speak for and as oneself. “I started off not really knowing who I was, because, I mean, I was a kid,” says Avery, pink-haired and precocious, in the film’s first scene, as she reflects on the end of a five-year filming process, age 12 looking back at age seven, “a little bit after the trans … trans … transformation? That’s pretty much what I remember,” she says before plunging into a pool.

Filmed over the course of five years and two tonally opposed presidential administrations, from 2014 to 2019, Transhood, directed by Sharon Liese, follows four families in Kansas City, Missouri, as they navigate the challenges – some mundane and familiar, some daunting, some infuriating and frustrating – of growing up transgender in America’s heartland, at different stages of childhood development and articulations of gender expression.

The oldest, Leena, age 15 at the beginning of filming, is an aspiring model and makeup artist with Little Mermaid-style red locks – she connects with the character of Ariel, she explains over a manicure – especially close with her father and with a boyfriend seemingly at ease with her identity. Jay, age 12, is less vocal; circumspect and unnervingly wise, a quiet anchor for his single mother, Bryce, herself a lesbian woman estranged from her family over his transition, Jay has not shared his identity to his classmates or his first girlfriend. At seven, Avery, assertive about her gender identity as a girl since age four, is already a seasoned public speaker on transgender identity along with her Southern Baptist-turned-activist mother, Debi. Phoenix, age four, begins the film as a self-described “girl-boy” fond of dresses and uncommitted to pronouns, as parents Molly and Matt struggle to navigate ties to an unfamiliar, open new community and ostracism from family.

Transhood rolls fluidly over the years, as the children grow into their bodies and gender expressions, consider hormone blockers and, for Leena, gender confirmation surgery. They shoulder the weight of bullying and the buffer of unconditional love, play on swing-sets and with fashion, embrace representing a transgender community and talk about anything else. “We want this to be about kids growing up in the midwest who happen to be transgender, and not about transgender kids,” Liese told the Guardian. “We also wanted to show that kids don’t always talk about being transgender.” Transhood captures tough, raw moments of bullying and isolation, the hurdle of medical bills and identity-affirming procedures denied by insurance, the pit-in-stomach phone call in which Jay’s girlfriend, learning he’s trans from old yearbook photos posted by taunters on Snapchat, breaks up with him. But “these kids are also kids – they’re enjoying and laughing at life, too,” said Liese.

“The most important thing, at the end of the day, is for people to feel like they know someone who’s trans,” the transgender film-maker Kimberly Reed, an executive producer on Transhood, told the Guardian. “That doesn’t happen often enough, but sometimes you can get to know people through a documentary film.”

That includes parents of transgender children, “who also need to see examples that reflect their life, that reflect what they’re going through,” said Reed. Often, that reflection is messy, imperfect and evolving – Transhood quietly observes the gray area between activism and exploitation, as Avery sours on the book signings arranged by Debi following her National Geographic cover on gender, or Bryce’s push and pull of how much emotional turmoil to share with Jay. Some of the developments are surprising; by the end of the film, Phoenix’s mother Molly, divorced and living with her parents during the Trump presidency, says she views being transgender as “probably a mental disorder”, as Phoenix now lives as a boy.

The evolution of parenting trans children can be uncomfortable, the dynamics deeper than gender, which is why the film-maker weren’t interested in “telling stories about extremely woke people for whom it was easy”, producer Sasha Alpert told the Guardian. “These are people who struggled to come to the point that they’ve landed at and feel good about how they were raising their children.”

“I was always aware of what we were shooting, and some of those moments where the parents especially were making hard calls and decisions and really trying to just figure out what to say, with nothing,” said Liese, who met each family through support groups organized by the Transgender Institute in Kansas City, where she also lives. “But I also am very aware that it’s not my intention to ever judge.

The timeline in Transhood cleaves in two with the election of Donald Trump, which emboldened a wave of state-level restrictions on transgender rights. In one morning and with a single tweet, Trump effectively banned transgender people from serving in the military. During filming, Missouri’s conservative legislature was one of several states to attempt passage of unfounded laws restricting school bathroom use to sex assigned at birth.

The administration’s hostility courses throughout the second half of Transhood, from the background noise of television news to its more acute tolls – Jay, 17 and perusing college brochures, ripping up one from a military school he was barred from attending; Phoenix, age four, worried about safety after experiencing the toxicity of a statehouse protest.

“We can all remember how unusual and strange and impossible the world seems when you’re young,” Reed said. “Now imagine that you have the instability that comes from thinking that you’re growing up into a world of adults where policy decisions are made based on a tweet because somebody woke up in a cranky mood one day.”

Representation through documentary film-making, especially of families growing into looser conceptions of gender expression and identity, can offer roadmaps to trans youth and parents where there was once an information vacuum, but Reed cautioned against mistaking visibility for safety. Even as representation of transgender people has exploded over the past decade, from Laverne Cox’s starring turn in Orange Is The New Black to the ballroom scene drama Pose and the critically acclaimed drama Transparent, to fashion campaigns starring trans models, transgender people, particularly trans women of color, face epidemic levels of violence. Transhood premieres days before the Transgender Day of Remembrance, on 20 November, which commemorates transgender people lost to violence. “We just can’t lose sight of that,” said Reed of the bigger picture. “I think the roots of it are in understanding trans youth and what they’re going through. We’re telling a tiny little sliver of the story, but we can’t lose sight of what is literally an epidemic.”

According to a 2015 study from Glaad, 84% of Americans did not personally know a transgender person, further weighting the influence of limited, and often flawed, portrayals of trans lives on screen. “Especially for people who don’t know any trans people, any trans kids, any parents of trans people, I just want them to feel like they got to know somebody a little bit better,” said Reed of her hopes for the film.

Now 17 years old, Jay was nervous about the world learning of his identity through Transhood, but “there’s going to be that one kid, or that one teenager who’s going to go to their parents and say, hey, look at this,” he says in the film’s conclusion. “And it’s going to help that one person figure out the rest of their journey.”