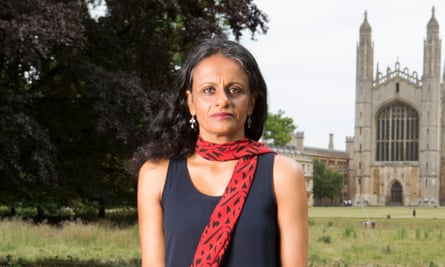 The Daily Mail has paid £25,000 to a Cambridge academic after the newspaper falsely accused her of inciting a race war.

Priyamvada Gopal reached the settlement with the news outlet and its sister website MailOnline after they published a column by Amanda Platell in which the journalist attributed a series of inflammatory quotes to the English professor.

In reality the quotes were fake and came from a mocked-up screengrab that had been circulating for some time among rightwing Twitter users.

On Friday, the Daily Mail issued a correction in which it said it had been wrong to imply, based on the fake tweets, that Gopal wanted to “incite an aggressive and potentially violent race war”, or “that she supports and endorses the subjugation and persecution of white people”.

The newspaper added: “Such comments were based on a tweet purportedly by Professor Gopal, which we have subsequently learnt was fake. We also partially quoted another tweet from Professor Gopal as saying: ‘White lives don’t matter.’ The tweet in fact continued: ‘As white lives.’ Professor Gopal’s actual view is that all lives should be valued.”

Platell’s false claims appeared in the Saturday edition of the Daily Mail, which is by far the biggest-selling edition of any print newspaper in Britain, with more than 1.5m sold every week. The apology appeared in a substantially smaller position in the newspaper’s corrections column on Friday.

In a statement, Gopal said: “I am pleased that the Mail has apologised for what it accepts were completely unfounded allegations. I have suffered appalling racist abuse myself, which made the publication of these allegations (and the increased abuse that followed) even more distressing. I am vigorously opposed to all forms of racism, and will continue to advocate and campaign for equal rights for everyone.”

As part of the agreement the Daily Mail has agreed to pay Gopal’s legal costs.

In June, Gopal told the Guardian how she was on the receiving end of a torrent of abuse after discussing attitudes to race in the UK. She said many of the abusive messages sent to her had been based on a flawed understanding of the nature of racism in the UK.