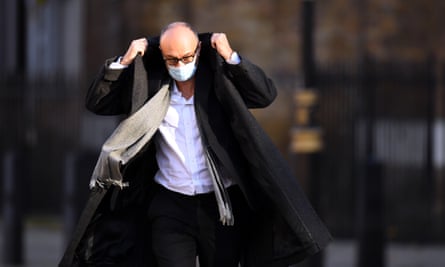 While some people may not have been very familiar with Dominic Cummings before his trip to Barnard Castle to “test his eyesight” in the spring, many will be familiar with his work.

Before joining the government, the longstanding Eurosceptic was the mastermind of the successful Vote Leave campaign in the 2016 referendum on the UK’s membership of the EU. He was responsible for the red bus plastered with the disputed figure of £350m a week for the NHS, targeted Facebook ads to reach voters, and the clarion call to “take back control”. His role in the campaign was dramatised for Channel 4 in Brexit: The Uncivil War with Benedict Cumberbatch as Cummings.

He has gained notoriety for a characteristic determination to forgo rules and conventions. Vote Leave was found by the Electoral Commission to have broken electoral law over spending limits, and Cummings was found in contempt of parliament in 2019 for refusing to give evidence to MPs investigating misinformation.

It was Cummings who devised the winning formula for the Conservatives’ election strategy in 2019. “Get Brexit Done” helped the party sweep into Labour’s heartlands.

Cummings went on to become one of the most powerful unelected political figures in the country, after Boris Johnson brought him into the heart of government and appointed him as his de facto chief of staff last summer.

He grabbed headlines again at the beginning of this year when he posted an advert on his personal blog for “weirdos and misfits with odd skills” to work for the government. In the same blog in January, he set out the plans for his own redundancy. “We want to improve performance and make me much less important – and within a year largely redundant.”

He set in motion a contentious plan to shake up the civil service, issuing a recruitment call for mathematicians and data scientists to be given more prominence in Whitehall.

In April it emerged that Cummings had been present at meetings of the Scientific Advisory Group for Emergencies (Sage), coordinating the government’s response to the coronavirus pandemic, raising concerns over possible political interference in science-based advice.

But Cummings became more of a household name in late May amid public uproar over revelations that he had driven 260 miles to his parents’ home in Durham while the country was in lockdown.

He was forced to address the media in an extraordinary and unprecedented press conference in Downing Street’s rose garden. He denied any wrongdoing and refused to resign. Maybe the timing just wasn’t part of his timetable.

Now Whitehall sources have confirmed that the prime minister’s chief adviser will step down at the end of the year.