Art of the ordeal: How the LA Chargers have stayed the NFL's unluckiest team

They’re not in San Diego anymore and there’s no Philip Rivers to blame, but the Chargers have kept an unyielding grip on their identity as the the NFL’s most unfortunate son 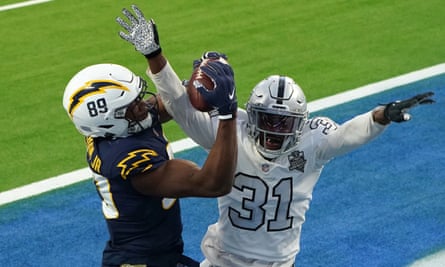 Tom Brady’s hairline. Pete Carroll having a good time. The Chargers finding ways to lose when it would be that much easier to win. They are the NFL’s constants.

In this, a year of sadness and chaos, it’s nice to have the Chargers to anchor our sense of normality too. Something that you can look at and exhale. Everything will be alright; things can go on as normal. The Chargers, as ever, are finding a way to Charger the game away.

A new year, new uniforms, new quarterback, and an empowered coach. None of it has mattered. The Chargers remain the Chargers. The team fled a city to remove some of the how do we keep losing like that stench, but it has followed them along the coastline.

They have lost three 17-points leads already this season. Their six losses on the year have come by a combined 24 points. Their points differential, minus-11, is bad but not awful. It would be enough to put them at the top of the NFC East. Instead, they’re rooted to the floor of the AFC West, sat at 2-6, and the idea of them moving on from their coach, Anthony Lynn, has moved from the ‘if’ to ‘when’ stage.

But there is, as always, artistry to the Chargers Way: to Charger-ing. They’re not in San Diego anymore. There is no Philip Rivers. And yet the how-do-they-do-it losses continue to pile up week after week.

This year’s Chargers team is not bad – the Chargers are rarely tragically, comically bad. The franchise’s 10-year record sits at a tidy 88-89. Some good years, some bad. Their average margin of victory over that 10-year sample size is 1.6. They are, in many ways, the league’s definition of mediocrity. But the Chargers aren’t mediocre or boring. They relish in sticking a little extra mustard on defeats, in teasing a win – a run-away win, usually – before slowly descending into defeat.

In a way, the Chargers’ lack of success has been more insidious than the doom and gloom of the Browns or Jets of the past decade. Both have been awful – a couple of times by design. They have trafficked in hope, but it has been hope on a distant, none specific timeline. The Chargers traffic in in-the-moment – are they good? – hope before pulling the rug out as soon as you stand up to go to the fridge.

Down five, needing a touchdown, with no time outs, and the length of the field to drive. No, that’s not the cliché/meme that came to signify the end of the Rivers era. That’s where Justin Herbert found himself on Sunday. No matter whether it’s in Los Angeles or San Diego, whether it’s Herbert or Rivers at quarterback, the Chargers have a pathological inability to close out games.

Since Lynn took over as head coach in 2017, the Chargers are 12-21 in one-score games. And almost all of those close victories came in Lynn’s second season when the Chargers ripped off a 12-4 record. Either side of that, Lynn’s team has been a mess in close games.

The latest edition to the collection was a beauty. It featured not one but two classics of the Charger genre.

Hebert, the team’s rookie quarterback sensation, was flawless. Needing five to win he effortlessly, methodically, drove the Chargers down the field. Herbert sliced and diced through the Oakland Raiders defense right down to the five-yard line. And so the Chargers did what any time would do (right?): They flexed out their 6ft 8in backup tight end, Donald Parham, and targeted him on a pair of fades.

A closer look via NFL Films at the Donald Parham touchdown drop at the end of the #Chargers game.pic.twitter.com/xFjrLIMduQ

Herbert and Parham whiffed on the first. But the duo nailed the second. Herbert gathered and fired in one motion. Parham leapt. Bang. Touchdown. Chargers win. Anthony Lynn can turn off his LinkedIn notifications.

Nope. It took all of six replays for it to become clear that Parham had not completed the catch. The ball had bobbled. The call was overturned. The Chargers lost.

This keeps happening, over and over again. Maybe it’s a yin to the Chargers loveable yang: a lingering sense of the aw shucks-ness of those Rivers-led teams; the non-aggressive, dispassionate, are they even there? fans; the best uniform-helmet combination in sports; hitting the rookie quarterback jackpot. Maybe there’s something in the Gatorade.

There are real, tangible reasons why this keeps happening, too. Anthony Lynn has proven to be a coach who perennial mismanages the game clock and suffers from a chronic can’t-get-out-of-his-own-way affliction in decisive spots.

The other reason: The Chargers’ special teams stink.

It is rare – read: borderline impossible – for a special teams unit to be bad at everything. Typically, even the teams that struggle at kicking field goals or extra points are decent at punting or returning punts, at kicking off or returning kicks. Not the Chargers. They are the only team in the league this season to score a negative in all five of the special teams categories. Football Outsiders rates the group as the worst in the league (32nd by DVOA/efficiency), the same as it ranked the group last season. In fact, the Chargers haven’t finished with a positive (let alone good) special teams score since 2013.

When a team’s special teams unit is bad, everything else becomes a slog. Drives feel a little longer, each one that bit more important. No game is ever truly put away. Once the other team starts scoring, they can score in chunks.

Being bad at special teams makes winning on a consistent basis tough. Being awful on special teams means you have to be perfect on the other two sides of the ball to be competitive.

Take last Sunday’s incident. The Chargers shouldn’t have been in that final drive position at all. With eight minutes remaining, down by two, the Chargers muffed a punt in their own half. The ensuing Raiders drive went nowhere, but given the position of the muff, the Raiders were already in comfortable field goal range.

What should have been an eight-minute stretch where the Chargers could have won with a field goal (not that that’s been reliable) turned into a touchdown-or-nothing drive.

No doubt the rise of Justin Herbert will cover for a bunch of this. For as bad and as pitiful and as gut-wrenching as the Chargers’ close losses have been over the past decade. They now have the one that really matters: That long-term hope.

Nothing in the sport ignites hope like the light bulb moment when you recognize a young quarterback is the real deal. Forget this game, we’re set for the next 20 years!

Through seven games, Herbert has looked every bit as special as any rookie starter chucked into the mix ahead of schedule possibly could. Yet even his brilliance has so far been subsumed by the Charger Way. No matter how well he has played, the rest of the roster and coaching staff has been unable to get out of his way.

Perhaps his career arc will follow the Charger course: exploding out of the gate before thudding back to the decidedly average. But there is hope. Hope that he will be the player who drags the franchise out of the decade-long purgatory somewhere closer to the promised land. And hope, though it brings sporting pain, is all a fan base can really ask for.