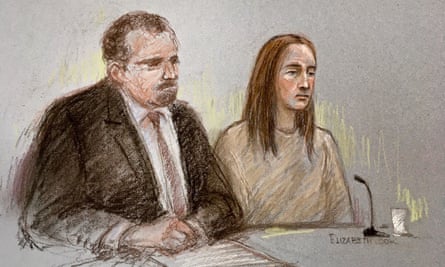 A nurse accused of killing eight babies at a hospital neo-natal unit has been remanded in custody after appearing in court via video link.

Lucy Letby sat at a desk beside her solicitor and only spoke at the 12-minute hearing to give her name, address and date of birth. She also faces 10 charges of attempted murder.

All the offences are alleged to have been carried out between June 2015 and June 2016.

Letby’s lawyer, Richard Thomas, made no application for bail as he sat beside her throughout the hearing in a police station in Chester.

The nurse, from Hereford, was originally arrested in 2018 and again in 2019, but was bailed pending further inquiries. She was re-arrested on Tuesday on suspicion of murdering eight babies and attempting to murder a further nine, as part of the investigation into the Countess of Chester hospital, which began in 2017.

Only two members of the press were allowed into the courtroom. A dozen more in an annexe courtroom next door watched via video link.

Families of the victims were also watching the proceedings via the same link at remote locations.

Neil Fearn, the chief executive of Pryers Solicitors, who is representing some of the families, said they welcomed the decision to charge Letby, describing it as a significant step forward.

“The families are overwhelmed with the news and there is a mix of emotion. All the families now have hope that they can finally start to learn the truth of what happened in the first days of their children’s lives,” Fearn said.

“We have been working with the families for many years on these cases and they have had to live with the consequences for all that time.”

Robyn Smith, of Slater and Gordon, representing two of the families, said: “Our clients are relieved that we are one step closer to getting the answers they have long-since been waiting for.

“We await the outcome of the criminal proceedings and will of course be supporting our clients through this traumatic process.”

Sanders said there should be no audio or video recordings of the proceedings.

The court clerk then dialled into Blacon police station, Chester, to see Letby, partly shadowed, waiting for proceedings to begin.

The judge, addressing the defendant, said: “Today’s court hearing is for a number of matters. I won’t be taking any plea today, as I’m sure Mr Thomas has discussed with you.

At the end of the hearing Sanders told Letby she would have to make a physical appearance at her next hearing, which which is due to be at Chester crown court on Friday afternoon.

The nurse, who at the time of the alleged offences was living in Blacon, was arrested in Hereford, where she spent her childhood and where her parents still live.

DCI Paul Hughes, who is leading the investigation, said following her re-arrest: “Parents of all the babies have been kept fully updated on this latest development and they are continuing to be supported throughout the process by specially trained officers.”

Detectives launched an investigation into baby deaths at the hospital in May 2017. They initially focused on the deaths of 15 infants between June 2015 and June 2016.

But the inquiry later widened to the deaths of 17 babies and the non-fatal collapses of 16 infants between March 2015 and July 2016.

Letby was remanded in custody.