A vaccine? Trump going? A bit of good news and my optimism has gone bananas

The doom spiral has been interrupted. Could it be that, by the spring, things will actually be better than they are now? 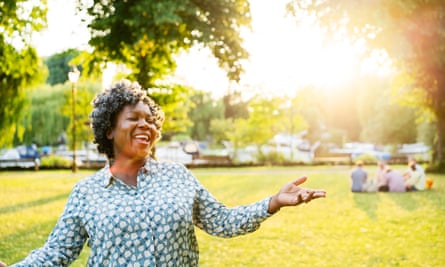 After five years of wanting to move, about two years of having to move and eight months of really urgently needing to move, the kids being so large and teen now that we could all smell each other across two floors of our titchy house, we finally moved. The sheer number of small, troublesome questions this prompted – have we traumatised the rabbit? Will the dog definitely die if he runs on to the A3, and will the resulting pile-up be legally my fault? What’s at the bottom of this pan we packed, oh God no, it’s curdled milk, who moves house without washing up first? Me, that’s who – completely clouded my vision. It was days before I realised something good had happened.

The US elections unfolded at the same time, following the same pattern. Lots of facts, and counting, and more facts, and revised counting, and nebulous fretting, until finally, wait … this is actually good. Something good has happened. This would have been a really fortuitous day to buy a lottery ticket, I thought on Saturday evening; with so much improbable good fortune, the chances of me winning a million quid are probably pretty high. I didn’t follow that up because I was too busy drinking and whatnot. Then two days later, a vaccine.

I normally take vaccine news with a pinch of salt. Whenever it is announced that we are nearly there, a boffin pops up to say: “On average, it takes seven years to develop a vaccine.” It’s like getting a minicab at 2am in the days before Uber. They might say 20 minutes, they might say 40, but there is no point getting excited until they are actually outside. Sarah Montague was on the radio talking to Sir John Bell, who is on the UK vaccine taskforce, while I drove to the dump, which is the only place I ever go now, and I think that would be true, lockdown or not.

“Do we now say with confidence that life should be returning to normal by spring?” she asked, and I thought: “Yeah, yeah, call me when the vaccine is actually outside.” “Yes. Yes. Yes,” Bell replied, not as if he were persuading himself, rather as if he were enjoying the word so much he couldn’t stop saying it. “I’m probably the first guy to say that,” he continued, in disbelief. “But I will say that with confidence.” It was the most remarkable piece of radio, the sound of someone realising, live on air, that a life or death matter had just tipped towards life. The markets went crazy. Shares in Cineworld rocketed by 50%. It felt as if there were fireworks going off in my heart. I wasn’t thinking about expansionist corporate cinema and whether or not I agreed with their living wage employment practices. I was dreaming of all the pic’n’mix and the total, wraparound sensory luxury of a long, loud film I don’t really understand.

My optimism has now become greedy, and everywhere I go, I see more good news. What if reaching net zero carbon emissions will be cheaper and easier than we thought (oh wait, it will)? What if the Tories fighting like rats in a sack results in a catastrophic fatigue at the highest level, and they all just give up, hand over to someone better? What if Brexit evaporated? What if businesses just turned round to Boris Johnson and said: “No, screw you, we won’t prepare, we don’t know what we’re preparing for, maybe you should have been better prepared in the first place”? What if the dog woke up with some sense and stopped trying to bolt out of the front door? What if Covid’s aftermath mirrors that of the second world war and there is an insatiable public hunger to honour its heroes – the bus drivers, the carers – in some real and meaningful way, something bigger than a badge or a snack box, something more in the region of a new social contract for decent wages that people can live on? What if theatres reopened and the pent-up creative energy resulted in Hilary Mantel’s Trilogy: The Musical?

The optimism is insane; I am polluting the likely with fantasies of the impossible. Yet the bad news cycle (call it 2015 to now, or date it back to 2008, whichever you prefer) had a dynamism: every time something awful happened, there was a worse chaser. Expecting disaster did not make you a pessimist, it made you a grownup. Only an idiot would hope for the best.

And now the doom spiral has been interrupted. The universe is not necessarily hurtling towards the light; I haven’t flipped to new age. But can we now say with confidence that life by the spring might not be as bad as everything bad that is happening now, with additional, appalling new features that we have not yet considered? Yes. Yes. Yes. I’m probably the first guy to say that.