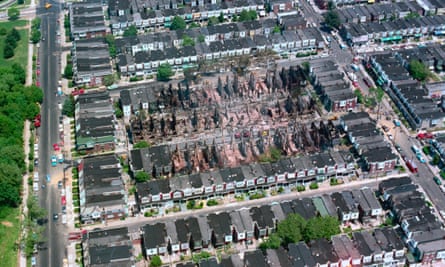 Philadelphia’s governing council has formally apologised for one of the worst atrocities in the long history of racial strife in the city – the aerial bombing on 13 May 1985 of a house occupied by members of the black liberation group Move that left 11 people dead, including five children.

The day police bombed a city street: can scars of 1985 Move atrocity be healed?
Read more

The council overwhelmingly approved a resolution that apologises for the “immeasurable and enduring harm” caused by the decision to drop C4 plastic explosives from a police helicopter onto the roof of 6221 Osage Avenue in West Philadelphia.

The bomb sparked an inferno that was left by authorities to rage until it had razed 61 houses in the largely black neighborhood.

The council acknowledged “recklessness in communication, negotiation and conflict resolution” in the days leading up to the bombing, as well as its failure to prevent “unnecessary pain and suffering to the Move family, their neighbors, friends and first responders”.

A day of “observation, reflection and recommitment” will be established on the anniversary of the bombing each year, as a step towards reconciliation.

The Move bombing was one of the most brutal and grotesque events during conflicts that erupted in the 1970s and 1980s between police and city authorities and black radicals demanding justice and liberation. The Move house was the focus of aggressive police surveillance for years, culminating in the decision to drop the incendiary device.

Mike Africa Jr, a member of Move whose uncle and cousin both died in the bombing, welcomed the council’s apology and said it demonstrated that “with enough pressure you can move mountains. With these small victories we have to add them up so that we can achieve a bigger victory and continue the work of restorative justice.”

The resolution was sponsored by council member Jamie Gauthier, who represents the area devastated by the bombing. Presenting it to the council, she made a direct connection between the brutality of the 1985 incident and the recent fatal police shooting of Walter Wallace, a 27-year-old black man who was undergoing a mental health crisis.

Gauthier said the council’s declaration “serves as recognition of the pain and trauma that these events have brought upon the community, and Black people in our city as a whole”.

It has taken years of delicate discussions to nudge the Philadelphia council to the point where it was prepared to make a formal apology, despite the gruesome nature of the 1985 attack. The five children who died in the inferno – Tree, Netta, Deleisha, Little Phil and Tomasa – were aged seven to 13.

When I was mayor, Philadelphia bombed civilians. It's time for the city to apologise | W Wilson Goode
Read more

At the time of the bombing Philadelphia was led by its first black mayor, Wilson Goode. He approved the attack though he claims to have been unaware of key decisions.

On the 35th anniversary of the bombing in May, he wrote an article in the Guardian in which he called on the city council to break its silence and formally express its regrets.

“After 35 years,” he wrote, “it would be helpful for the healing of all involved, especially the victims of this terrible event, if there was a formal apology by the city of Philadelphia. Many in the city still feel the pain of that day – I know I will always feel the pain.”