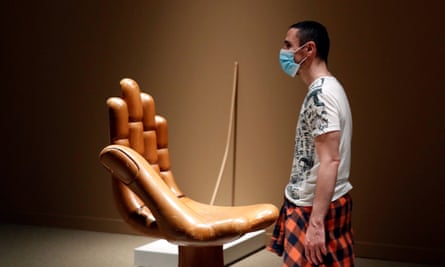 Anyone tiring of the many mundane strictures of the new normality can, in Madrid at least, escape temporarily into a world where hands serve as chairs, tables spin on bicycle wheels and horses obligingly proffer lamps from their heads.

An exhibition in the Spanish capital examines the countless ways in which the surrealist movement has influenced culture and design over the past century, from the sofa Salvador Dalí modelled on Mae West’s lips, to the music videos of Björk.

“The influence of surrealism goes far beyond a single era, a few manifestos and magazines and a few creators,” said Isabel Salgado, exhibitions director at La Caixa Foundation.

“Surrealism helped to break the dogma of functionalism – the dogma that insisted that form had to be linked to a function. Surrealism used the unconscious as a valid creative tool and one that opened the door to memory, imagination, desire and fate.”

After being introduced to the surrealists and their work, visitors are led through three atmospherically lit rooms that explore the movement’s subversion of reality, its relationship with eroticism (a red lit room), and, finally, its fascination with the wild and the irrational.

The show, called Objects of Desire: Surrealism and Design 1924-2020, is intended to immerse people in what its curator, Mateo Kries, describes as “one of the most influential dialogues between the world of art and design in the 20th century”.

But Kries, the director of the Vitra design museum, hopes it will also speak to visitors about the present day “and the possibilities of art and design inspiring our own view on the present”.

While many of the works on display are familiar, such as Man Ray’s Le Violon d’Ingres and the footage from Un Chien Andalou, some of the modern exhibits are less well known.

Displayed alongside three Björk videos – Utopia, Mutual Core and Hidden Place – is an undulating 2018 dress from Van Herpen, and the show’s final piece, Dunne & Raby’s Designs for an Overpopulated Planet: the Foragers.

The Foragers speculates on the lengths to which humanity will have to go in order to carry on feeding itself over the coming decades. In it, the British design duo create a series of DIY machines that use “synthetic biology to create microbial stomach bacteria, along with electronic and mechanical devices, to maximise the nutritional value of the urban environment”.

As Kries points out, the piece’s position in the show is far from accidental. “Dunne & Raby imagine a kind of fictional future scenario in which we will have to live in a world that is overpopulated – and I think a pandemic can be a natural part of that scenario – and they imagine what objects we would need,” he said.

“There’s that element of speculation, of fiction – maybe also of dreaming and of dystopias – that comes into the world of contemporary design and opens new perspectives for contemporary designers to think about our reality in a wider way.”