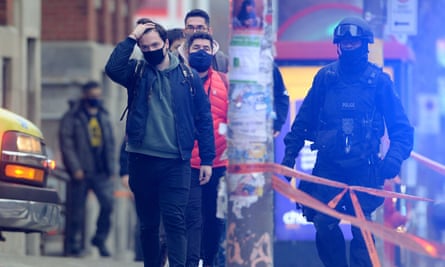 A major police operation was under way in Montreal on Friday afternoon at offices of French video game company Ubisoft that media reported was a possible hostage-taking, but police later said no threat had yet been found, and CBC News reported that the incident had been caused by a hoax 911 call.

Police confirmed the large deployment on Twitter had started at about 1.30pm, but offered no details while urging people to “avoid the area” near St-Laurent Boulevard and St-Viateur Street in Montreal’s Mile-End neighbourhood, close to downtown. Police later updated in a statement that “no threat has been detected so far. No injuries were reported.”

Television images showed the streets around the old brick building cordoned off by heavily armed officers, and dozens of Ubisoft workers who appeared to have barricaded themselves on the rooftop.

A company employee reached by telephone told public broadcaster Radio-Canada that about 50 people were led to the rooftop terrace by managers who then barricaded the door leading to the stairwell with furniture.

The staffer said people were cold but in good spirits.

Others were seen being escorted out of the front entrance.

“Police officers were dispatched to the scene to respond to a 911 call,” a police spokesperson told AFP.

“The information has still not been validated,” the official said, adding that “officers specializing in this type of intervention are currently on the scene and are carrying out checks”.

“No injuries were reported.”

About 4,000 people would normally be working at its Montreal offices but many have been teleworking during the Covid-19 pandemic.