Student who tested positive on Thursday was genomically linked to defence cluster, but city may reintroduce masks on public transport next week 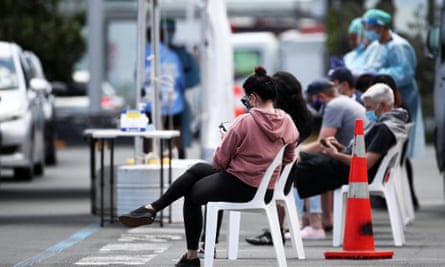 New Zealand will stay at alert level one but mandatory mask-wearing on public transport in Auckland and on flights may return next week after a new community case was confirmed on Thursday.

Auckland, which was partially shut down on Friday with about 100,000 people asked to work from home, has reopened and weekend events can go ahead, though the Covid response minister, Chris Hipkins, has urged people to be cautious.

The warning follows the new case, a student who lives in central Auckland,being genomically linked to a defence worker who was infected at a quarantine hotel earlier this month. On Thursday the student’s case was being described as having an unknown source, but Friday’s genomic link made further undetected spread of the virus “less likely”.

The defence cluster began with a defence worker passing Covid-19 to a colleague at a work meeting. Hipkins questioned why these meetings weren’t being done virtually and defence on Friday announced that they would be from now on.

While there was not yet the level of risk to lift the alert level, Hipkins said he would take an order to cabinet on Monday seeking to make mask use on public transport in Auckland mandatory, including all flights in and out of the city.

The student, who is aged in her 20s, is the fourth case linked to the defence cluster. Work is continuing to try to determine where and how the student contracted the virus.

Her three close contacts have moved to a quarantine centre and have tested negative. Those who visited places where the student was while contagious have been asked to get tested.

She reported feeling symptoms on Monday and was tested on Tuesday. But on Wednesday she went to work wearing a mask, in a customer-facing role at A-Z Collections clothing store. Her test came back positive on Thursday.

While infectious she took a number of Uber rides and visited four central Auckland restaurants and cafes for food and takeaways, as well as one of New Zealand’s major department stores, Smith & Caughey’s. She also briefly visited a city university campus and doctors’ rooms.

The woman lives in a 170-unit apartment complex, with a shared pool and gym, in the city centre. Residents have been asked to self isolate but some have reportedly been seen leaving carrying overnight bags. In response, public health protection workers were being deployed to secure the building on Friday.

In August, Auckland entered a second three-week lockdown after a cluster of more than 100 infected people developed in the city’s south. Auckland is New Zealand’s largest city and home to 1.7 million people. Fewer than 2,000 people have become infected with Covid-19 in New Zealand while 25 have died.

The results of the government’s elimination strategy and hardline border policies have been praised around the world, and the freedom New Zealanders enjoy is envied. Sporting matches, concerts and eating and drinking out are all possible, and the prime minister, Jacinda Ardern, has resisted lobbying by Australia and some Pacific nations to open the borders.